The tenderloin sandwich – or pork fritter, as it’s sometimes called – is Indiana’s gift to the culinary world.  I order one every time we visit the Hoosier State, and I developed my own recipe for those times in between.  The tenderloin sandwich is remarkably easy to make.  I’m surprised that more of my displaced Indiana friends don’t make them at home.  Be inspired!

You will need a wide frying pan, a half sheet pan with rack, 3 dredging plates, and a rolling pin or meat pounder.

Plan ahead.  Bread the pork chops and refrigerate several hours before you plan to fry, so that the breading has time to adhere well to the meat.  Serves 4.

To butterfly a boneless pork chop, put the chop on a cutting board, and cut the chop almost in half through one side, stopping about ¼ inch from the chop’s far edge. (I cut from right to left, because I’m right handed.)  Open the chop like you would open a book.

Then, cover the top of the chop with plastic wrap, and pound it gently with a rolling pin or meat pounder to achieve a uniform thickness of about ¼ inch.  You should end up with a big, thin piece of pork.  It will be much bigger than the roll you’ll eventually eat it on.  That’s part of the plan!

Now that the chops are nice and thin, it’s time to bread them.

Set up your three dredging dishes.  In the first one, add the ¼ cup of flour, and a sprinkle of salt and pepper.  In the second one, crack the 3 eggs and whisk them together.  I like to add a few dashes of Tabasco to this mixture, but it’s optional.  In the third dish, add 2 cups of panko bread crumbs, and if you wish, add a handful of parmesan cheese, and mix it into the panko.  The cheese is optional.

Standard breading procedure:  Dredge the pork in the flour, then in the egg, shaking off any excess flour or egg.  Then dredge in the panko bread crumbs.  Press the pork (both sides!) into the panko so that it gets a good stick.  Put the breaded chops on a plate (I use wax paper to separate them), cover, and put in the fridge for at least an hour.  Longer is fine too.

When you’re ready to cook, put the half sheet tray and rack in the oven, set to 250 degrees.  This is where you will keep your cooked tenderloins warm, while you’re completing the frying.

Add canola oil to your wide frying pan, and heat to medium high.  You want enough oil to cover the bottom of the pan, but not enough so that your tenderloin is submerged.  This is a “shallow fry,” not a deep fry.  You can test the oil’s temperature by throwing a couple of panko crumbs into the pan.  When they lightly sizzle, the oil is hot enough to cook the tenderloins.

You’re going to cook the tenderloins one at a time.  If you’ve done a good job pounding the meat, one tenderloin will pretty much fill a large pan.

Because the pork is so thin, it will fry quickly.  The key is to manage the heat, so that the pork has time to cook, and the bread crumbs do not burn.  I often turn the stove down to medium heat after I put the tenderloin in the pan.  I let it get that first hot blast from medium high, then back off a little bit.  It’s really about knowing your own stove.

Fry the tenderloin until it is golden brown – about 2 minutes per side.  Seriously, that’s all it takes if you’ve pounded the pork to ¼ inch and managed your oil temperature well.  When the crispy golden brown tenderloin is done, put it on the baking rack in the oven to stay warm, while you fry the rest.  You can test the tenderloin for doneness with an instant-read thermometer (145 degrees F or higher based on the current USDA recommendation) or cut open to ensure that the meat inside is white.

If you think your oil is getting too gunky toward the end, put in fresh oil.  Four tenderloins are about the max, in my opinion, for one batch of oil.

Serve on a hamburger bun.  You should have much more tenderloin than bun.  That’s tradition.

You’ll be singing “Back Home Again, in Indiana” before you know it.

Note:  This recipe can be made with gluten free all purpose flour, gluten free panko, and served on a gluten free bun.  I know, because I've done it.  Here's the catch:  Gluten free panko tends to brown more quickly than regular panko, so it's very important to manage the oil temperature carefully.  Keep an eye on the color, and be sure to test the pork for doneness before serving.  If you're going the gluten free route, I suggest you go ALL gluten free (as in, do not mix tenderloins breaded with regular flour / crumbs with your GF preparation).

And HERE is your lucky bonus recipe!  Do the exact same thing with boneless chicken breast – same butterfly and dredge process, with the same ingredients (except use chicken).  Top with a warm marinara sauce and mozzarella cheese, and you have the most delicious chicken parm sandwich you’ll ever eat!  Another one of Matt's favorite meals! 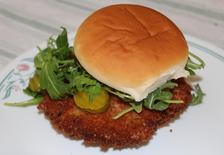 This one is for all of my Indiana friends who have moved to states where you can't find the tenderloin sandwich.  You can do it, people!  Make your own!  You'll be transported back to the school cafeteria and the local sandwich shop.