It takes 1 hour to make your own marinara with this recipe.  You'll have enough for a spaghetti dinner for 4 and leftovers for another meal.  In the summer, I use tomatoes from The Farm (my garden).  Off-season, I use the best quality canned tomatoes that I can buy.  I began to make my own marinara when it became very important to track carb and sugar intake for my son.  I noticed that good quality jarred sauces contained added sugars, and I believed I could do better.  Once I realized how easy it is to make homemade, I never went back.  For this recipe, I'll reference canned tomatoes with a note at the end for the use of fresh tomatoes.  And please, read to the end to learn about my optional secret ingredient.  It makes all the difference in the recipe.​

Heat the olive oil in a large pot over medium to medium high heat.

Add the secret ingredient (see note below).  Saute for 1 - 2 minutes in the pot until it melts.  It will almost disappear from sight.

Add a couple shakes of crushed red pepper.  Saute for about 20 seconds.

Sprinkle with kosher salt (1 teaspoon).  Saute until the onions are soft (not brown),  4 - 5 minutes.  Stir occasionally.

Add the tomato paste and the smashed garlic cloves.  Saute for 1 minute.

Add all of the tomatoes including juice from the cans.  Smash tomatoes slightly with a spoon or potato masher.  Cook at a medium low simmer for 40 minutes.

Occasionally taste for salt.  Add salt if necessary.  If you think the sauce is too salty, add a small amount of water.  If you get a tin taste from the canned tomatoes, add a pinch of sugar.

After 40 minutes of simmering, remove the bay leaves from pot.  Discard.

Add the fresh basil and the oregano.  Continue to simmer on very low heat for 10 more minutes.

*The secret ingredient is anchovy.  Add 2 or 3 filets from an oil packed can or jar.  Let them melt into the hot olive oil.  Use a spoon to break them up while cooking.  They will almost disappear, and will lend a wonderfully nutty and natural salty flavor to the sauce.  No one will even know they are there, except you.  (Disclose if your diners have a fish allergy!)  Many restaurants use anchovy in their tomato base.  Cooked this way, they taste absolutely nothing like a raw anchovy, so give it a try for added depth and flavor to the marinara.  If you don’t use the anchovies, you should taste the sauce frequently while cooking to make sure you have enough salt.

The photo for this recipe shows tomatoes, not sauce, because fresh tomatoes, the best quality you can grow or buy, are the key to a rich marinara.   Also, here's a translation:  Gravy, Sunday sugo, and red gravy all mean marinara in New England, especially among Italian families.  Keep this in mind when ordering at restaurants! 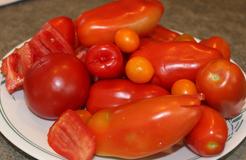