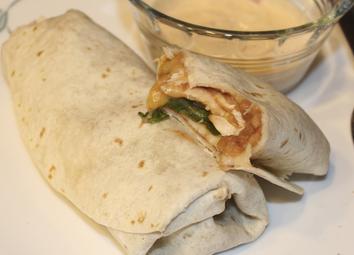 The title says it all:  Matt’s favorite burrito.  There’s really nothing fancy about this, and I use several store-bought ingredients.  The magic is in the proportions and preparation.  Makes 4.

First, make the chipotle sour cream.  Chop 2 or 3 chipotle peppers, and add them to a half-cup of sour cream.  Add a tablespoon of the adobo sauce.  Mix well, and let sit in the fridge for an hour or more so that the flavors come together.

Let the tortillas come to room temperature.  They will wrap more easily that way.

Preheat oven to 375 degrees.  Put the chicken tenders on a baking sheet.  Drizzle very lightly with olive oil and toss, so that the tenders get a light coating of the oil.  Sprinkle with salt, pepper, and a couple pinches of ground cumin.  Go lightly on the cumin; it’s strong.  Toss the tenders so that the seasoning is evenly distributed.

Bake at 375 degrees for 15-20 minutes, depending on the thickness of the chicken.  I remove my chicken when it is 160 degrees – I then put it on a plate and cover it with foil.  Carry-over cooking will bring it to 165 degrees or more.  That’s what you want – at least 165 degrees to be safe.  Let the chicken rest for 15-20 minutes.  If you’re using a chicken breast, follow the same procedure but bake to 165 degrees, then let rest for 15 minutes, then cut into small chunks.

If you’re going to eat in the next half hour, go ahead with the other steps.  If you’re prepping early, for a meal later, refrigerate the chicken after it rests.

Mince the jalapeno.  Heat the refried beans gently over medium low heat, and add the jalapeno.  Mix well, and just let the beans warm through.  They don’t have to boil or bubble.  Warm is perfect, because you don’t want them to be “hot” when you build the burrito.

Put the tortilla in front of you.  Spread ¼ cup of refried beans on the tortilla, leaving a ½ inch border on all sides of the tortilla. Then take a tablespoon of the chipotle sour cream and spread that on top of the beans.  Add a line of chicken cubes left to right in the bottom third of the tortilla.  Sprinkle shredded cheese across the whole tortilla (leaving the border clear).

Wrap the rolled tortilla tightly in non-stick foil.  Put the tortillas into the oven, on a baking sheet for 20 minutes at 250 degrees. After 20 minutes, unwrap the burritos, serve with extra chipotle sour cream, lettuce and/or tomato.  Extra refried beans, on the side are a good touch too.

Obviously this recipe can be customized.  I like to put jalapenos inside my wrap (beyond what’s in the refried beans).  Onions. Olives.  Roasted corn.  All would be good.  Keep a balance of flavors.  The chicken and silky beans are the stars.  Sit back, and enjoy.

Matt loves this dinner.  When I say, "We're having the burritos," he says, "DOPE!"  Healthy junk food.  Okay, you could make this on a wheat tortilla, but I indulge Matt's taste once in a while.  What makes this burrito so good?  Wrap it in foil and let it warm for 20-30 minutes.  The beans and cheese melt together, and the chicken gets piping hot.  Serve with your favorite Mexican sides, including my chipotle sour cream!