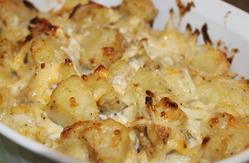 This recipe was given to my dad and mom in the mid-1970s.  Mr. and Mrs. Yates owned a farm that was on the road to the golf course where Dad golfed, and in the summer and fall they had a road-side veggie stand where Dad often stopped for fresh produce and conversation.  I was his caddy (until I started to play on my own), so I was with Dad on many of these stops.  He introduced Mom to Mr. and Mrs. Yates.  A friendship was born.  They gave us this family recipe.  I have updated it a little bit with the addition of Greek yogurt.  Serves 3 or 4.

Put washed potatoes in a pot, and cover them with cold water by 2 inches.  Add 2 big pinches kosher salt.  Bring to a boil.  Try to pick potatoes that are about the same size, so that they cook evenly.

Cook the potatoes, whole, in their skins until they are almost, but not quite done.  A fork poked into them should go in easily but have a little bit of resistance.  Start checking after 7 minutes for medium potatoes, but boil for as long or little as it takes.  Just make sure the potatoes still have a little resistance left in them, because you’ll be baking them later.  Boiling time totally depends on the size of the potatoes.

Drain and cool the potatoes.  When easy to handle, you can peel them, or leave skins on.  Personally, I leave the skins on (very thin on Yukon golds), but Mrs. Yates used to peel them.  Cut the potatoes into medium sized chunks.  Then put them in a big bowl.

To the big bowl, add the mayonnaise and Greek yogurt, and toss with the potatoes, so potatoes are covered.  If the mixture looks too dry, add more mayo or yogurt in small quantities, a tablespoon at a time.  You have to eyeball it, but you can’t mess up, so don’t worry!  The mayo / yogurt should look like a generous coating, but not a soup!

Then add the sliced raw onions, cheese, a teaspoon of salt, and some shakes of black pepper.  Stir together.  Taste it to make sure you have enough salt / pepper.  I like a lot of black pepper in this recipe.

Put everything into a casserole or glass baking dish.

Top with extra cheese, as much as you wish.

Bake at 350 degrees for 30 to 45 minutes (depending on how done your potatoes were when they went into the oven).  Check occasionally with a fork.  When the cheese is melted and the potatoes are tender, they are done.  Enjoy!

Notes:  This dish can be made up to a day ahead of time.  Refrigerate (covered) after stirring together all of the ingredients and topping with cheese.  Keep in mind that it will take longer for cold potatoes to cook and come to hot temperature.  Also, you can cut down on boiling time by cutting your potatoes into good-sized chunks at the outset.  Adjust boiling time if you pre-cut the potatoes.  Test with a fork for doneness.

These potatoes are part of my life, from childhood until now. This is a treasure recipe.  My mom cooked them for our family and carried them to many a potluck.  I've served them with many a quick supper and cookout. They take little time to prep and bake, and are universally loved.  Best of all, they come from a story of friendship.