This dish is a long-time family favorite.  It freezes well, travels well for potlucks, and usually there are no leftovers!  It's easy to tailor to your own taste.  Give it a try.  The photo shows my version with ham and peas.

My mom calls this recipe “Chicken Spaghetti.”  She has made it with chicken for more than 50 years.  My gang calls it ham spaghetti.  They like when I add ham (rather than chicken), probably because I almost never serve ham.  I’ve also used turkey.  This dish is perfect for clearing out the fridge after Thanksgiving!  A vegetable version with mushrooms would be tasty.  Lobster would be downright decadent.

The choice is entirely yours.  Basically, I’m giving you the template for a baked spaghetti casserole with creamy white sauce.  You get to add whatever you want!  Serves 3 or 4.

1/3 cup butter or margarine
1/3 cup all purpose flour
1 ½ cups heavy cream
1/4 teaspoon ground black pepper
A dash of ground nutmeg (preferably fresh)
2 Tablespoons chopped parsley
3 cups of skinless, boneless chicken breast, cooked and cut into cubes (rotisserie chicken works great).  Ham, turkey, sautéed mushrooms / veggies – they all work as the main ingredient with the spaghetti.  Just make sure that your “addition” is fully cooked and drained of excess moisture before the casserole is baked.
2 tablespoons parmesan cheese (or to your liking)

Preheat your oven to 375 degrees F.  Boil water for the spaghetti.  Measure your heavy cream and set it aside on a counter.  (See note)

Cook the spaghetti according to package instructions, drain, and set aside.

In a medium saucepan, heat the condensed chicken broth over medium heat until bubbly.  Or use my shortcut:  Empty both cans of broth into a large glass measuring cup and microwave until the broth gets hot (60-90 seconds).

Here’s another shortcut.  Make your white sauce in the same pot you used to cook your spaghetti.  If you do this, the dirty dishes are cut to almost none.

In your empty spaghetti pot (or in a large saucepan, if you prefer), melt the butter over low heat.  Whisk in the flour until well blended. Cook on medium-low heat for 2 minutes until bubbly, whisking all the time.  Then slowly whisk in the warm chicken broth until smooth.

Reduce heat to low.  Whisk in the cream a little at a time, then add the salt, pepper, nutmeg, and parsley.  Stir.

Let the sauce warm gently on low for 3-4 minutes to thicken and come together.  Stir occasionally.  Then take the sauce off of the heat.

Off the heat, stir in the chicken (ham, turkey, whatever) and spaghetti.  Combine thoroughly.

Pour the mixture into a 3 quart baking dish.  Sprinkle with parmesan cheese (as much as you want).  Bake uncovered for 40 minutes or until hot.  Check the middle to make sure it’s hot.  If the top starts to look too brown while baking, cover with foil for the remaining time.

Serve when the casserole is hot and the top is nicely browned.

Notes:  I let the cream sit at room temperature for 10 minutes or so, before I whisk it into the broth mixture.  If you take the cream out of the fridge when you begin making the recipe, it will be a nice temperature for mixing into your broth and making the sauce.  If you prefer, you can use a mixture of whole milk and half & half in place of heavy cream, but you will get the thickest sauce with heavy cream.

Ideas:  When I make this with ham, I often add ½ cup of peas to the mixture (at the same time that I add the spaghetti).  If you use frozen peas, thaw them so that they don’t bring down the sauce’s temperature.

The dish can be made up to a day in advance.  Stop at the point where everything is mixed together and is in the baking dish.  Let it cool, cover, and refrigerate.  When you are ready to bake / serve, take the chill off of the casserole by letting it sit on the counter for 15-20 minutes.  Then bake uncovered.  It may take an extra 10-15 minutes to get thoroughly hot in the middle.  You can check it from time to time, and you definitely will want to cover the top about halfway through the baking time so that the top doesn’t burn. 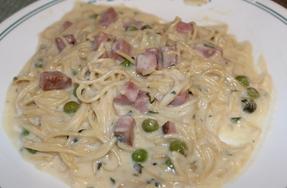