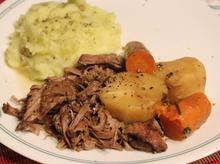 This is such an easy recipe and filling meal that you definitely should make it.  You'll need a slow cooker (crock pot).  That's what makes it so easy.  Wicked good comfort food, especially in a never-ending winter.  And you get two dinners from one easy prep!

My guys love a good pot roast.  And I agree, sometimes it really hits the spot – usually when winter seems like it will never end.  Like about now!

Here are 5 things about this recipe that make it outstanding:

Obviously the star of this meal is the chuck roast.  I like a 4 to 5-pound roast.  One reason why this recipe is so easy is that there are steps you can do, or steps you can skip.  You get to decide.  If you “skip” steps, I’m confident that your pot roast still will taste great.  It may not look as pretty, but it will be delicious.

You will need a slow cooker (aka Crock Pot) for this recipe.

Note:  I do not put potatoes into the slow cooker because the cooking time is so long that the potatoes get mushy.  I prefer to make mashed potatoes and serve that with the gravy / juice from the slow cooker.  Sometimes I make roasted potatoes.

First, scrub the carrots, peel the parsnips, and cut them into big chunks.  You want big chunks so that the veggies don’t dissolve during the long cooking time.  Also prepare your onions.

Second optional step (highly recommended that you do this):  Salt and pepper your roast liberally, whether you brown the roast or not.  It needs the seasoning.  If the roast is tied, it is okay to leave the string on.  On the stovetop, bring the canola oil to medium heat in a Dutch oven.  Brown the roast on all sides – about 3 to 4 minutes per side.  Again, the intention is not to cook the roast, only to create a brown crust on the outside.  If you skip this step, your pot roast will still cook properly and will taste fine, but it won’t look as rich.  It might look a bit gray.  You can minimize that by adding a cup of red wine to the slow cooker.  Or you can just brown the meat!

After the roast is browned, put it into the slow cooker on top of the veggies.  (I often untie the meat at this point so I don’t have to worry about strings when I’m serving.)  Then take 1 cup of beef broth and deglaze the Dutch oven you used to brown the meat.  Use a spoon or spatula to lift the flavor bits off the bottom of the pot.

Add the remaining veggies, thyme and rosemary to the slow cooker, around and on top of the beef.

Pour in the beef broth that you used to deglaze the pot.  Then add more beef broth.  You do not want to cover the meat.  Bring the liquid about ¾ of the way up the side of the roast.  This usually requires between 3 and 4 cups of broth, total.  If you are adding red wine, you will need less beef broth.  Remember, do not cover the meat!

Put the lid on your slow cooker and set the temperature to high, and the timer for 6 to 7 hours.  I suggest 6 hours for a 3-4 pound roast, and at least 7 hours for a 5 pound roast.  You almost can’t cook it for too long.

About half way through the cooking time, flip the roast so that what was on the bottom now is on the top.  This also provides a chance to assess the liquid level.  If it looks like your slow cooker is getting dry, add more broth.  (This, however, should not be necessary.)

After 6 or 7 hours, the meat will pull apart easily.  The broth will be screaming hot and it makes a good gravy for the meat and for mashed potatoes.  The carrots, turnips and onions are downright delicious.  Enjoy!

Second Recipe:  If you have leftovers, let the meat cool and put it in a covered plastic container, and refrigerate.  Save the broth as well.  The next day, skim off the fat that collects at the top of the container(s).  Gently reheat the broth and meat in a pot on the stovetop.  Serve on rolls or open-faced on a piece of white bread.  This may well be the best pot roast sandwich you’ve ever eaten.