This​ recipe is special to me.  It is the first recipe that I published on my former website, and it has pleased us on many occasions.  It's sweet , with touches of smoke, and tang.  I hope you like it too!

Corn on the cob is delicious and versatile.  And it sings of summer.  Sometimes I want that beautiful sweet and crunchy corn taste without the mess of the cob, so here is an easy recipe I developed.  We were having a dinner of grilled porterhouse steaks with creamy, baked mashed potatoes, and I wanted a dish with a little pop.  In my fridge, I found:

Cut the corn off of the cob.  I stand the corn up tall, on a kitchen towel, and then cut down the length of the cob.  I like when the corn kernels stick together and make bigger chunks.

Chop about one-third cup of roasted red pepper.  This is maybe 2 or 3 pepper chunks from the jar, depending on size.  Or go crazy and roast your own red peppers. That’s great too, but I was cleaning out my fridge, so I went with the jarred peppers.

Crumble the feta, but not into itty-bitty pieces.  Leave nice chunks.  I like to see and taste my cheese.

While our dinner steak was resting - so about 10 minutes before we were ready to eat - I melted 2 tablespoons of butter in a skillet, because corn and butter go together, right?  When the butter was melted, I added the corn, 1/8 teaspoon of salt, and 1/4 teaspoon of pepper.  You should season to your taste.

Saute the corn over a fairly high heat (medium high).  I like my corn crunchy, so I sauteed it for 4 minutes, but you can prepare it to your taste.  Then I added the roasted red pepper.  All I wanted the red pepper to do was to heat through and add some of its liquid to the buttery sauce.

Taste the corn!  Season with more salt and pepper if needed.  When the corn is the texture you like, add the feta crumbles.  Take the corn off the heat, and let the feta soften.  Feta doesn’t melt well, so don’t expect it to.  Just let it warm through.  Then you’re done!  Serve and enjoy!

PS - it’s not in the recipe, but I had a ripe habanero handy, so I made very, very small slivers of about 1/2 of the habanero, and added that to the mix.  I put it in the skillet when I added the roasted red pepper.  My gang liked this.  If you want “kick” you can add minced jalapeno, serrano, or habanero... just keep the pieces really small, and remember to let the corn shine. 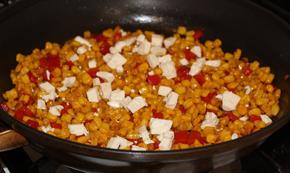