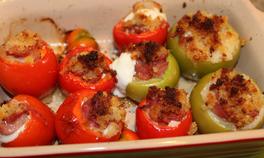 Here's a fun bite-sized snack that shouts "Summer Garden!"   The cheese and ham in the peppers are savory little surprises, and the crunchy panko topping adds a pleasing pop.

​It was an outstanding pepper season for The Farm, my little backyard herb and vegetable garden, and by September I was looking for new and creative ways to celebrate the harvest.  The peppers were perfectly sized for stuffing, so I experimented with ingredients and concluded that mozzarella and rosemary ham were the  winning combination.  The mozzarella "cools" the peppers, which can be quite spicy, and the ham is salty and gets a little bit crispy.  This is a delightfully sassy two-bite snack that oozes cheese AND personality!

Preheat the oven to 350 degrees F.

Wash the peppers, and cut off the cap of each.  Use a small spoon to scoop out the seeds and flesh.  Leave the walls of the pepper intact.

Lightly drizzle olive oil into and on to the peppers, and then season each with a sprinkle of salt and pepper.  Wipe off / out any excess oil.

Cut the mozzarella into small chunks.  Look at the opening in your peppers to determine an appropriate size.  Wrap the mozzarella chunk in a strip of ham, and stuff it tightly into the pepper.

Put the panko into a bowl (amount depends on the number of peppers you have).  Drizzle lightly with olive oil just so the panko is moist, not drippy.  Top each pepper with about ½ teaspoon of panko – or more if the pepper is a big one.  Basically, let the panko cover the cap and come to a little pile on top.

Place the stuffed & topped peppers in a ceramic baking dish or on a baking sheet.  Make sure the peppers stand up (if need be, you can cut a small slice off the bottom of the peppers to make them stand evenly).  Bake for 30 to 40 minutes, until the breadcrumbs are golden brown and crunchy, the peppers look softened but not mushy, and you might even see some cheese oozing from the insides.  Serve immediately.

The cherry peppers in my garden range from “bell pepper hot” to “jalapeno hot.”  It’s really a toss-up, so make sure your friends know the range of heat they may encounter, if you, too, are using home grown cherry peppers.  These are perfect appetizers for a Mexican meal, a quick spicy bite, or a way to use up lots of cherry peppers at the end of season!